Painting - Libby paints daily, mostly nature scenes though she enjoys doing figure and abstract work as well. After taking plein-air workshops with Andy Evansen & Fred Graff (WOWS), she saw the benefits of working on site, how fresh and immediate painting becomes. She finds that she doesn’t become as finicky; that she looks at a scene and art piece as a whole rather than as many lines and colors.

Libby belong to WOWS, AWS, OPAS, OWS, FAA, TWS, YSAC. My next show at the Winds Cafe in YS will be June 2023! Thank you for inviting me to demo today. 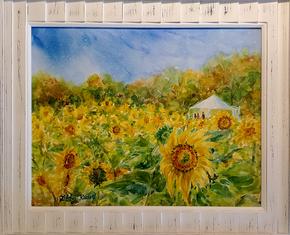 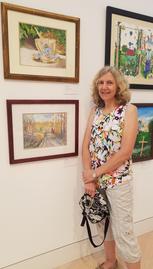 Watercolors are Libbys’ main medium along with creating in acrylic, fabric and digital mediums. She has been painting seriously since 2000 when she took classes at SAM with Enid Willard and art friends. She joined WOWS and has taken many workshops from artists such as Homer Hacker, Lian Zhen, Keiko Tenabe, etc. Gaining courage, she entered group shows (got ribbons!), hosted group and solo shows, got commissions, taught art groups at the schools and at YSAC, etc.

In 2013, she joined Village Artisans in Yellow Springs, OH where people can shop daily. I regularly post on FB/ IG for fun/to share art. This was a game changer because work can be sold instead of piling up in the studio.